Those who grew up playing games like Counter Strike will definitely appreciate PUBG! In this multiplayer shooter you’re challenged to defeat all the players on a deserted island and remain the last one alive. The participants land on a map with tactically planned landscape where they can find weapons and ammo and choose a position in line with their strategy. But winning in PUBG isn’t as easy as you might expect.

Despite the huge size of the map and a fairly small number of opponents, there will always be those willing to shoot you in the back at the first chance. To avoid it, try not to stick behind the same object for too long, be it a tree, stone or earth pit. Once you kill someone, loot them as quickly as you can and don’t forget to move left and right. The same rule applies to buildings if you prefer a quite playing style shooting enemies as they run or drive by. If you have no muffler on your gun, the sounds of shooting will attract too much attention. It won’t be hard for your opponents to figure out where you are and wait for you to run out of your hiding when the safe zone shrinks. Crossing an open terrain, try not to stop and move by short intervals from one object to another. Even if your enemies start firing at you from somewhere, you will always have an opportunity to hide behind it, use medicine and fight back.

There is an aiming system allowing you to make accurate shots from any distance. While holding your breath, the zoom will increase a little and the aim will stabilize. At the bottom of the screen, you’ll see the condition of your lungs. If all the oxygen is used up, you won’t be able to run until your lungs are restored. It’s the same when you hold your breath under water.

Considering the choice of weapons, it all depends on your playing style and preferences. However, there is a rule that works for all players: you need to have at least two kinds of weapon. One of them is necessary for storming and shooting at short distances while the other is for medium and long distances. Don’t forget that you also need to consider the ballistics. When making long-distance shots, you need to aim a bit higher that your target. If your enemy is on the move, shoot ahead of them. You will get the hang of this mechanics in a few hours of gameplay. Keep these things in mind while making your first shot at PUBG, figuratively and literally, and your chances of victory will increase significantly! Perhaps you’ll even see your name among the top players! 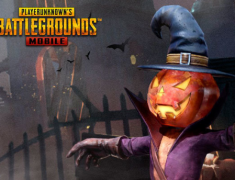